Marissa Saucedo found the net 27 times in her return to the Buena High girls soccer team.

But she didn’t score her favorite goal of her senior year.

The senior midfielder was only involved in the build up to the 50th-minute winner by Taylin Butterbaugh at Oxnard on Jan. 28, which provided the win that allowed the Bulldogs to grab a share of the Pacific View League title.

That’s what it meant for Saucedo to be involved in restoring one of Buena’s illustrious programs to glory after five years without a league title.

More: Clark Slajchert is The Star’s Boys Basketball Player of the Year

More: Taylor Donaldson is The Star’s Girls Basketball Player of the Year

“It was pretty cool to be part of the team that kind of brought it back,” Saucedo said. “It’s a good feeling to walk around town with a sense of pride.

“Now when I’m wearing my Buena shirt (in public), you’ll hear, ‘You guys did well this year.’ ”

“She came back with a goal and on a mission to have a great senior year, to be a great leader and great teammate,” said first-year Buena head coach A.J. Tewes.

Saucedo did not enjoy her junior year, when she was forced to miss the season because she was playing in U.S. Soccer’s development academy.

“Looking back on it, it was sad that I wasn’t able to play my junior year,” Saucedo said. “My sister played and I was taking her to all her practices and games anyway. So not being out there with her was pretty sad.”

But a decision by Saucedo’s club team, Camarillo Eagles S.C., to move from the development academy to the Elite Clubs National League opened up the opportunity for Saucedo, and many other local girls soccer players, to participate this season.

“I’m super happy and thankful for that because I made a lot of good friends and cool memories,” Saucedo said.

In one of the great individual seasons locally since U.S. international Hailie Mace scored 26 goals for Buena as a senior in 2014-15, Saucedo piled up nine multi-goal games, including four hat tricks. For all her accomplishments, Saucedo is The Star’s Girls Soccer Player of the Year. 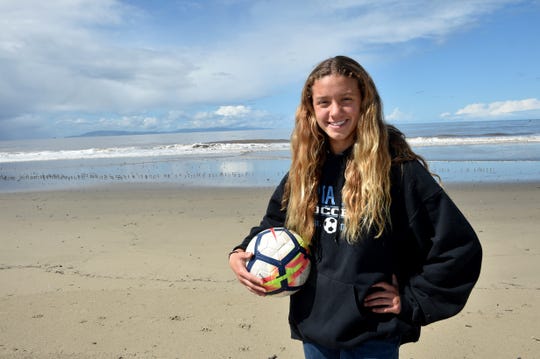 After missing her junior year because of playing in U.S. Soccer’s development academy, Marissa Saucedo made a big impact for Buena in her final high school season. (Photo: ANTHONY PLASCENCIA/THE STAR)

Saucedo, who plays in a withdrawn forward role for her club team, played in her favorite position in midfield for the Bulldogs, alongside her longtime friend and club teammate, Butterbaugh.

“Transitioning to high school was very easy,” Butterbaugh said. “It was just really fun. Since we’ve been playing so long together, we just have that connection on the field, you could really see that.”

Saucedo and Butterbaugh have been playing together since they were 7, often carpooling to practices and games.

“We grew really close because of that,” said Butterbaugh. “We’ve always been super close.” 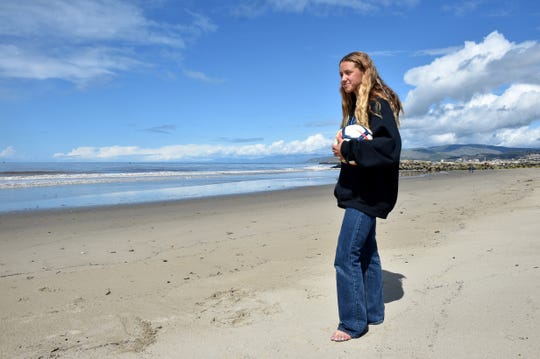 With Butterbaugh in a defensive role and Saucedo in an attacking role, Buena had one of the most effective midfields in Ventura County behind the strikeforce of senior Lizabeth Payne and freshman Abigail Wood.

“I knew she was going to make a run,” Butterbaugh said. “She knew I’d play her the ball. We just knew each other’s habits.”

Tewes gave Saucedo the freedom to go forward, when the opportunity presented itself, and Saucedo repaid her coach with production.

“I didn’t want to restrict her from getting forward and creating some magic,” Tewes said, “which obviously she’s very good at.”

Considering Buena split the league title with the CIF State Division 3 regional champion, the Bulldogs knew they had the potential to make a long postseason run.

Despite delivering the program’s first playoff win in five years, Buena’s season ended bitterly in the second round with an incredible three disallowed goals in the second half of 3-1 loss at Whittier-La Serna.

Two of the disallowed goals were scored by Saucedo, who argued both were legitimate. 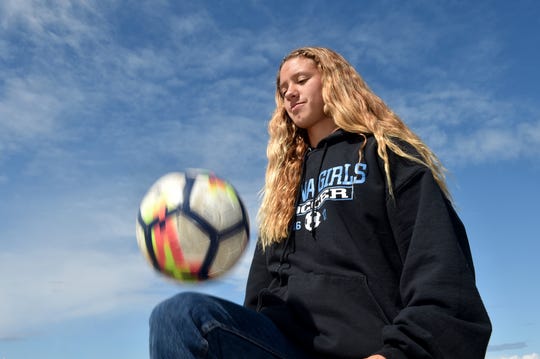 After a sensational senior season, Buena High’s Marissa Saucedo will play for the University of Massachusetts-Lowell. (Photo: ANTHONY PLASCENCIA/THE STAR)

“It is what it is, when it comes down to it,” Saucedo said. “But it’s a bummer to know we could have gone farther and won CIF, if that didn’t happen.”

Saucedo will continue her playing career at the UnMassachusetts-Lowell in the NCAA Division I American East Conference.

“I’m very excited,” Saucedo said. “They have a lot of diversity with players from Iceland, Spain, Serbia and other countries. I’m super excited to learn a new style of play.”

Buena High School is celebrating National Signing Day and we are so proud of Grace Saad, Marissa Saucedo and Trevor Smentek 🥎⚽️⚾️ @vcspreps@BuenaSoftball@buenagsoccer@RiverHawkWSOC@lakeeriebase@shu_softballpic.twitter.com/lw8CRhOdE9

Tewes knows the Riverhawks are getting more than a productive attacking player.

“She does what she does on the field and makes a huge impact, but what also made a difference this year was how good a teammate she was,” Tewes said. “The other girls wanted to emulate her, wanted to be competitive like her.”

China’s US patsies, from Antifa to the NBA