Hunger, nutrition are worse than before lockdown. PDS must be universalised 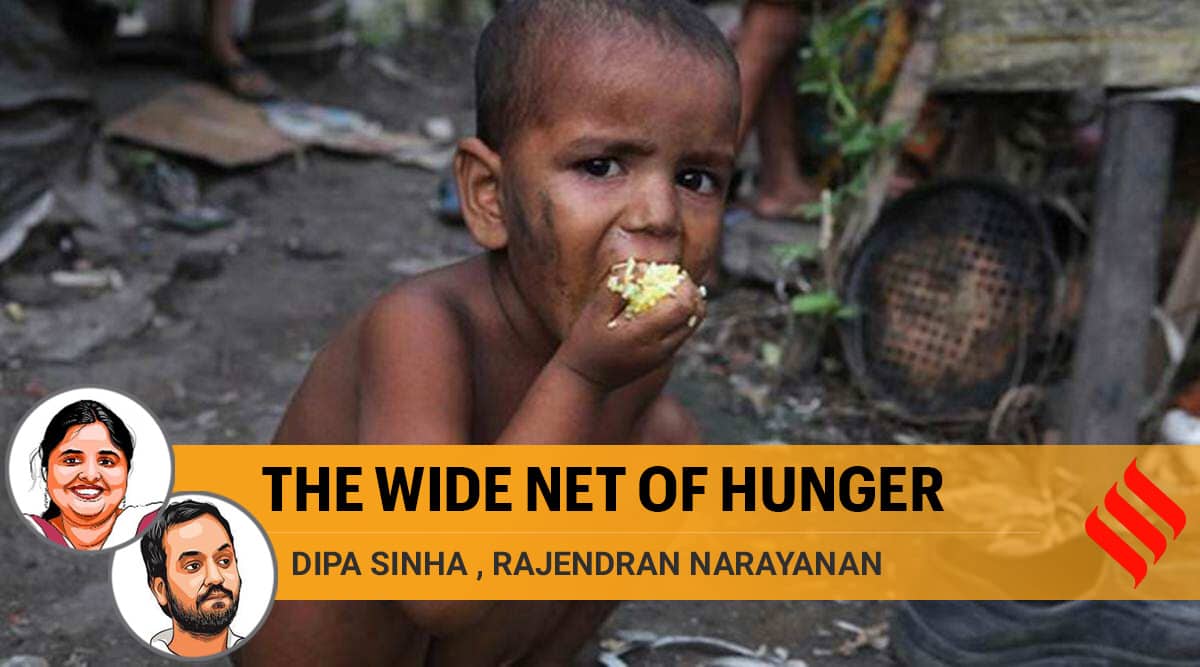 In addition, to resuscitate demand, MGNREGA needs to be strengthened along with an urban employment programme.

The effects of the lockdown and the resultant economic crisis continue to disproportionately impact the poor and informal sector workers. Since the lockdown, the Government of India (GoI) has announced relief packages under the Pradhan Mantri Gareeb Kalyan Yojana (PMGKY) and Atmanirbhar Bharat. However, numerous studies have shown their inadequacy. The Economist referred to India’s lockdown as the “stingiest”.

What is more worrying is that even the few measures such as free grains to those having ration cards as per the National Food Security Act (NFSA) are coming to an end this month. While there have been reports hinting at continuing the provision of free grains, it is yet to be announced. In this context, the Right to Food campaign in partnership with several civil society organisations initiated “Hunger Watch”, a rapid survey across 11 states (~3,500 households) from mid-September to mid-October. The objective was to assess the situation of hunger among vulnerable groups, as well as to take immediate local action to support those in extreme need. To this end, we focussed on the conditions among marginalised communities such as Dalit/Adivasi households, daily-wage workers, households with single women, aged or disabled and so on. The survey was conducted through physical visits to the households by local researcher activists and 41 per cent of our sample reported having a monthly income of less than Rs 3,000 pre-lockdown compared to only 2.4 per cent more than Rs 15,000. One-third of them were daily wage workers.

Although there is an improvement in the current situation compared to what it was during the peak of the lockdown in April-May, it is still much worse than it was before the lockdown in February-March. Widespread hunger continues even now. This was seen across the board, irrespective of the income levels.

Not only did these households start off very poor, but they also face precarious conditions with 27 per cent saying that they had no income in the month before the survey (compared to 43 per cent with no income during April-May). Out of those who didn’t have any income in April-May, 87 per cent continue to have no income. One in three respondents reported members having to skip meals “sometimes” or “often”. To cope with reduced income and food insecurity, people have reduced their food consumption and compromised on food quality. More than half the respondents said their current consumption of rice/wheat was less than what it was pre-lockdown. The situation was even worse in the case of dal; almost two-thirds say their consumption of pulses reduced. Based on the 2011 National Sample Survey, a recent paper by Raghunathan, Headey, and Herforth, published in the Food Policy showed that between 63 and 76 per cent of rural Indians could not afford nutritious diets. Further, based on leaked consumption expenditure survey from 2017-18, S Subramanian, showed that consumption declined uniformly across the entire cross-section of rural India. Taken together, these studies suggest that affordability of nutritious diets might have worsened before the lockdown and got further exacerbated since. Indeed, the statistics from our survey comparing the food situation before lockdown and in October indicate about 71 per cent of our respondents reported that the nutritional quality of food worsened. Two-thirds of households reported that the quantity of food consumption either decreased somewhat or decreased a lot and 73 per cent reported that their consumption of green vegetables decreased.

Given that Indian diets are already known to be quite poor on average, such a reduction in consumption of foods is not only a reflection of the current levels of deprivation but also can be expected to have serious health and nutrition effects in the longer term.

The contribution of a well-functioning Public Distribution System (PDS) along with cash-support measures through social security pensions cannot be overstated in this context. Among the Hunger Watch respondents, 70 per cent had some kind of a ration card. Of those who had a ration card, 93 per cent said that they received free rations at least once (two-thirds said they received free rations every month). While on the one hand, it is heartening to see that at such a time when all else seemed to fail, the PDS seems to have come to the rescue for many, it is also daunting to imagine what the situation would be if even this support is missing. The PDS gives only 5 kg of foodgrain per head each month at subsidised prices and as part of Covid-relief, an additional 5 kg for free and 1 kg pulses for the entire household. The demand for ration cards amongst those who didn’t have one was also high.

Although it has been over six months since the Supreme Court gave directions that school meals should continue even though schools are closed due to the pandemic, less than half the anganwadi children (47 per cent) and 63 per cent of school children said that they were getting some sort of dry rations and/or cash support in lieu of the meals.

All indications show that an economic revival will take some time — support is required during this period to at least prevent starvation. There is no better time to universalise PDS. In addition, to resuscitate demand, MGNREGA needs to be strengthened along with an urban employment programme. We cannot pretend we are back to normal.

This article first appeared in the print edition on November 23, 2020 under the title ‘The wide net of hunger’. Sinha teaches in Ambedkar University Delhi and Rajendran teaches in Azim Premji University, Bangalore. They are both associated with the Right to Food campaign

📣 The Indian Express is now on Telegram. Click here to join our channel (@indianexpress) and stay updated with the latest headlines

For all the latest Opinion News, download Indian Express App.

A nutritional guide for a healthy pregnancy

A nutritional guide for a healthy pregnancy

Running a virtual race? Here’s what you should be eating