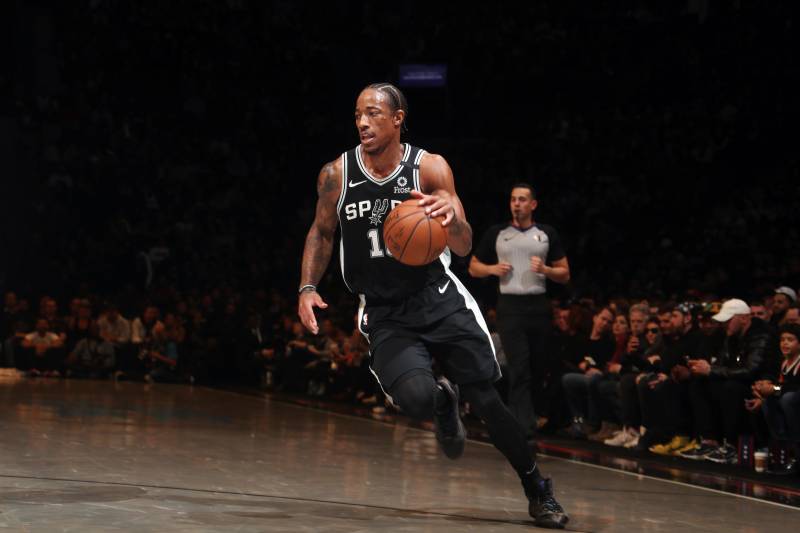 The 2019-20 NBA regular season may be suspended until further notice due to the coronavirus pandemic, but rumors about player movement have only picked up steam.

Even before commissioner Adam Silver decided in favor of game stoppage, it had become common knowledge that San Antonio Spurs star DeMar Derozan was unhappy.

“I don’t have to sugarcoat anything,” Jabari Young of CNBC Sports Business told ESPN San Antonio. “DeMar DeRozan is not happy in San Antonio.”

DeRozan’s unhappiness notwithstanding, money is always a factor, too, when players are considering what’s best for their career moving forward. After all, procuring the right situation in professional sports is a game of chess, not checkers.

He has a player option for $27.7 million next season, so he can either opt in and give it another go in San Antonio and maybe hope for a trade or opt out and explore his value on the market as an unrestricted free agent.

But with the threat of a lower salary cap, he would be taking a big risk.

According to B/R’s Ric Bucher, “a drop of $10 million to $15 million is not outside the realm of possibility,” meaning that teams that otherwise would have had the salary-cap space to pursue DeRozan in free agency may suddenly not have enough room.

Whether the 30-year-old wants to test the market or not, though, he may be forced into it.

Chris Haynes, NBA Insider for Yahoo Sports, reported on the TNT broadcast that if DeRozan can’t come to an extension agreement with the Spurs, then he intends to decline his player option and test the waters this summer.

That may work in his favor, though, as Haynes also reported that other teams such as the New York Knicks would be interested in him if he hits the market.

In addition to the Knicks, the Atlanta Hawks, Charlotte Hornets, Detroit Pistons and Miami Heat are projected to have cap space this summer.

If DeRozan did go to the Eastern Conference, he might be able to reclaim his status as an All Star-caliber player.

“The offense is not running as smoothly as one would think with a guy like him in the lineup,” Young said. “So you have to decide if you want to take that money and if you want to come back to a situation that’s just not suitable. I mean, it didn’t work.

“They’re not winning, they don’t look like they enjoy playing with each other, the roster just doesn’t fit.”

Through 61 games this season, DeRozan is averaging 22.2 points, 5.6 rebounds and 5.6 assists. He’s also been a beacon of efficiency, shooting a career-high 52.6 percent from the field.

Do The Knicks Want Christian Wood?

Like anything else, free agency is all about timing. Detroit Pistons forward Christian Wood is about to find out why.

According to SNY’s Ian Begley, the New York Knicks’ front office are “enamored” with the 24-year-old, who has taken advantage of his opportunities in Detroit.

After the Pistons traded Andre Drummond to the Cleveland Cavaliers on February 6, Wood was inserted into the starting lineup and has averaged 23 points and 10 rebounds per game.

“I wouldn’t say it’s taken me surprise,” he told Ron Beard of the Detroit News. “I think I was always confident with myself before the (Drummond) trade. I think I was doing great then and only getting like 18 minutes.”

In the NBA, it’s great to be known as a walking double-double, but that’s not the only thing attractive about Wood’s potential.

At 6’10”, 214 pounds, the third-year big man is also able to stretch the floor. During a six-game spell in March, Wood shot 43.5 percent from behind the arc.

Additionally, he went for a career-high 32 points against the Philadelphia 76ers before the NBA hiatus was announced.

“Obviously, the talent is there. Sometimes it takes a little while to stick and learn what it takes to be a pro. I think he is there now. He’s been up, down, on teams, off teams, but I think he’s pretty solid now and understands the opportunity in front of him.

“It wasn’t anything blatant. It’s the little-bitty things that I think he started to realize were important, also. I pull for him. I think he’s a good guy. He had some big games for us when he was here.”

Wood’s burgeoning play will likely make him a target for many teams this summer, but Detroit does have his Early Bird rights, meaning they can go over the salary cap if needed to re-sign him.

New York is already projected to have around $38.76 million in cap space, but with Taj Gibson and Bobby Portis likely gone after this season, they’ll be on the lookout for another big to pair with Julius Randle and Mitchell Robinson.

According to Begley’s source, the Knicks have been monitoring Wood for “much of the season.”

That could mean something or nothing, considering that former superagent Leon Rose took over as team president and will likely make changes to the front office in addition to hiring a new head coach.

Whether or not he gets the call from the Knicks, Wood is in the driver’s seat.

He’s shown he can play well with extended minutes and that means big money, no matter who’s willing to pay it.

Sumrall soccer back in the thick of things – WDAM